The Great Gale and Wreck of the Steamer 'Cawarra' 1866

Thursday, 12 July 1866, will be a day long to be sorrowfully remembered by the inhabitants of Newcastle. It will be marked in the calendar as the day on which one of the most dreadful wrecks occurred that has ever taken place either here or elsewhere in the entire history of the colony. The worst among the wrecks of former years are as nothing as compared with this, if we except only the loss of the Dunbar and one or two others, whilst in many of the elements of tragic horror, this vessel going down in broad daylight, at the very mouth of the harbour, within a few hundred yards of the shore, is the most dreadful, the most calamitous, and the most heartrending of them all.

The first premonition of the storm was felt in Sydney on the morning of Wednesday, 11 July 1866. The barometer became very unsettled and heavy banked clouds along the eastern horizon became heavier as the day wore on. At about two o’clock in the afternoon the wind shifted from West to South and East and the clouds rapidly spread across the sky and grew thicker and darker until about sunset. Just before the gale came on, the Victory left Sydney Harbour for Newcastle and not long later the Cawarra under the command of Captain Chatfield, with a large and valuable cargo, left for Brisbane and Rockhampton.

Of the first portion of the gale the government astronomer reported that on Thursday morning the wind changed rather rapidly from West by South to North by East. At about half past two o’clock in the morning the wind changed rapidly from North by East to East by South, shifting entirely round the compass by the South. The greatest force of the wind occurred about seven o’clock in Sydney when it reached sixty-one miles per hour.

In Newcastle the weather, which for the past few days had been very fine, suddenly changed on Wednesday. During the day it was not very bad, but as night came on the wind freshened, and throughout the whole of Wednesday night it blew very hard from the South, and rained almost without a minute's intermission. At daylight, on Thursday morning, a stiff gale was still blowing, and a very heavy sea was running outside the harbour. Between nine and ten o'clock the gale if anything got worse, and the wind veered round to the North East, and a brig was signalled as making for Port Hunter. Her position was felt to be one of considerable danger.

A large number of persons went onto the sand-hills and over to the Lighthouse to watch her make the harbour, which she did in safety at about half-past eleven o'clock. This vessel proved to be the brig Victory, recently out from England, and quite a new vessel. Shortly before this the Sydney steamer, the Coonanbarra, had, to the surprise of almost everybody, sailed from Newcastle, and her progress as she rounded Nobby's was watched with no little anxiety. She got safely out, and proceeded on her voyage to Sydney. About the time that the Victory was nearing the port, a steamer was observed a considerable distance off, but whether making for the port or not, could not be ascertained. For several hours, now and again, as the squall cleared off, the smoke of the steamer could be seen. At one time it was thought to be the Coonanbarra returning to port. It would now appear, however, that this must have been the Cawarra all the time. What the Captain's object was in standing off the port so long before he attempted to enter, is, of course, not known, and now that the Captain himself and all on board save one solitary individual, have perished, it is not likely that it ever will be known. 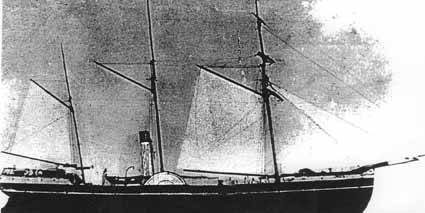 The Cawarra was one of the finest steamers in the colonies being a 552-ton iron paddle steamer, which was built in Glasgow in 1864 for the Australian Steam Navigation Company. The ship was 207 feet long by 25 by 13 and first arrived in Sydney Harbour from Scotland under Captain Vaircross on 7 December 1864. Her engine power was 170hp and was schooner-rigged.  It has since been a regular trader between Sydney and mostly Brisbane. On 11 July 1886 she was newly under the command of Captain Chatfield.

However, about one o'clock, rather later perhaps, a steamer was signalled as making for Port in the usual way, and it was at once expected that the midday Sydney boat was coming in. From motives of curiosity a great number of persons soon assembled on the wharf. We ourselves arrived there just as what afterwards proved to be the unfortunate Cawarra rounding Nobby's, and was abreast of the Lighthouse. It having been noted that a tremendous sea was rolling on the bar, every eye was turned towards the steamer to see how she would acquit herself in crossing it.

The excitement at this time was intense. People were rushing in all directions to the wharf, and to every place, which commanded a view of the steamer. Soon the vessel was seen to be approaching the bar, and already in the midst of a terrific sea. For a few minutes after this she continued to steam ahead. Up to this time scarcely any one dreamt that she was in imminent danger, although her position was felt to be a critical one. Suddenly she was noticed to come to a standstill. This increased the excitement, and the crowds on the wharf and sand hills increased rapidly. After remaining in one position for several minutes, the Cawarra steamed with her jib and mainsail set, in the direction of Nobby's. It was now evident to everyone that the unfortunate vessel was in great danger. Some asserted that she was losing ground and drifting to the Oyster Bank. After again remaining stationary for several minutes, she was observed palpably to be drawn back to her first stationary position. She remained there rolling and pitching in a fearful sea for a short time, and then suddenly turned around and steamed ahead as if going out to sea again. She made some little headway, but not much. Several tremendous seas struck her in succession, and an impression prevailed among the spectators that the water had got into the engine-room. Almost immediately afterwards, she made a futile effort to get into smooth water by steaming backwards. The attempt, however, was made too late. A few minutes more, and smoke ceased to issue from her funnel, plainly denoting that her fires were extinguished. A rush of steam followed, and the worst fears of everyone were realised.